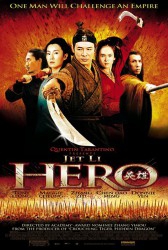 Storyline: In ancient China, before the reign of the first emperor, warring factions throughout the Six Kingdoms plot to assassinate the most powerful ruler, Qin. When a minor official defeats Qin's three principal enemies, he is summoned to the palace to tell Qin the story of his surprising victory.