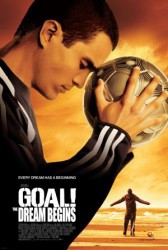 Storyline: Santiago's father, Hernan Munez, smuggled his penniless Mexican family over the US border to seek a better, albeit modest future in L.A. Eldest son Santiago dreams of more, like native Angelinos, then joining Hernan's gardening firm. His change arrives when a British ex-pro spots him as an exceptional soccer natural and promises he can arrange a real British talent scout to check him out. Although that falls trough and dad forbids it, Santiago accepts grandma's savings to try out with English premier league club Newcastle. Despite his asthma, he gets in and befriends the freshly transferred, desperately undisciplined bad boy star scorer, party animal Gavin Harris, who becomes his bothersome house-mate, a recipe for trouble and yet each's salvation.