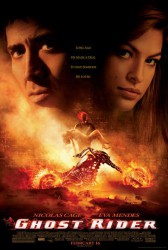 Storyline: When the motorcyclist Johnny Blaze finds that his father Barton Blaze has a terminal cancer, he accepts a pact with the Mephistopheles, giving his soul for the health of his beloved father. But the devil deceives him, and Barton dies in a motorcycle accident during an exhibition. Johnny leaves the carnival, his town, his friends and his girlfriend Roxanne. Years later Johnny Blaze becomes a famous motorcyclist, who risks his life in his shows, and he meets Roxanne again, now a TV reporter. However, Mephistopheles proposes Johnny to release his contract if he become the "Ghost Rider" and defeat his evil son Blackheart, who wants to possess one thousand evil souls and transform hell on earth.