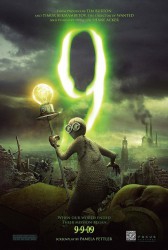 Storyline: In a world destroyed in a war between man and machine, a hand-stitched doll with the number 9 written on its back comes to life. The world he has awakened in is frightening, but he quickly learns that he is not alone and that there are others like him, also with a single digit written on their back. The first one he encounters is 2 who tells him something of what happened to the world. 2 is also thrilled with the disk 9 is carrying, one with three unique symbols on the front. 9 soon learns that the disk and some of the other dolls who are prepared to die for the good of humankind may be the last hope for man's salvation.